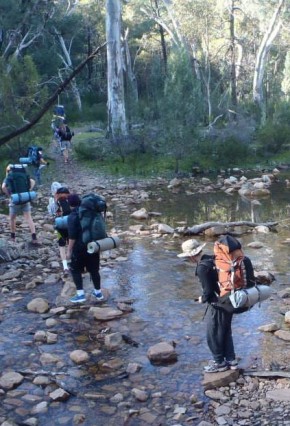 In the early 1970s there was mounting concern amongst educators and the recreational walking community about the standard of bushwalking leadership in South Australia.

The concern was mainly directed towards walking parties organized by schools and youth groups. In both cases, insufficiently trained or experienced leaders were taking groups of young people into bushland and forest areas and experiencing difficulties. Groups were frequently too large, poorly prepared and equipped, and little thought had been given to emergency procedures. Many of those walking expeditions were therefore unsafe, likely to be environmentally damaging, and unsuccessful both educationally and recreationally. Put simply, there were many instances where young people were being put at risk while they littered, broke and trampled the areas they were supposed to appreciate, and being turned off an activity which was supposed to provide health, enjoyment and personal growth.

During this period also, outdoor education and recreation were undergoing somewhat of a boom both in the UK and in Australia. Walking and camping were a large component in this growth, which was also being experienced in SA. Whilst there were no fatalities recorded in SA at that time, in 1971, Glen Matters, a boy from a Victorian school group, died from hypothermia on a walking trip in Tasmania. At least another ten members of the party were lucky to survive. This event followed closely upon the heels of a school party disaster in Britain in which six students died.

Training schemes were rapidly established in the U.K. and in Victoria by organizations and individuals concerned to prevent a recurrence of such tragedies.

Soon after the establishment of the training board in Victoria, moves for a similar training scheme were instituted in S.A. The initiative came from the National Fitness Council (NFC), since absorbed into the Office of Recreation and Sport, the SA Mountain Activities Federation (SAMAF – now defunct) and key individuals within the Education Department.

In 1973, the Bush and Mountain Walking Leadership Training Board was established. It was a representative Board with two members each from the Education Department, NFC, Outward Bound SA, SAMAF, and the Police Search and Rescue Squad. In 1974 this Board began conducting courses, which were largely modelled on the summer British Mountain Leadership Course and the Victorian Bushwalking and Mountain Craft Leadership Course. At the initial course there were 21 trainees, 15 of whom were school teachers. Youth workers were the second largest group. A small number of club walkers were also included. The Board has conducted similar courses annually since that time. In 1995 we renamed the Board to Bushwalking Leadership South Australia and have kept that name since. Bushwalking Leadership SA has always been run by volunteers and continues to.

At the same time as courses were being established here and elsewhere, some agencies, in particular education departments and authorities, were setting leadership guidelines for outdoor activities including walking. In S.A. the Education Department has a comprehensive set of guidelines which deal with issues such as leader training and accreditation and leader to student ratios. Its position on walking is largely based on the advice of the Board. Some private schools, Family & Youth Services, the Duke of Edinburgh’s Award Scheme, community & commercial operators have adopted similar guidelines using Bushwalking Leadership SA course outlines as the standard.