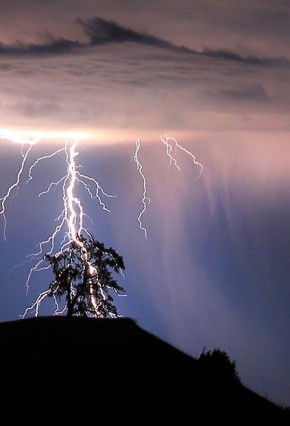 I will not delve into. the technicalities of negatively and positively charged ions, differences in electrical potential, and whether lightning goes from earth to cloud or vice versa. Let’s just call it ‘electricity’.

A thunder-cloud is, if you like, a vast mass of moist air very deficient in electricity. The ground over which we walk has an abundance of the stuff, and the nature of electricity is to equalize its ‘pressure’ when two electrically unequal bodies come fairly close to each other. However, the strength of the electrical charge in the ground is insufficient, initially, to enable it to break through the intervening air to the deficient cloud (air is not a good conductor of electricity).

The cloud has to develop to the point where the sheer pressure difference of electricity in the ground, relative to that in the cloud, overcomes the resistance to the air space between. We then see the white hot air through which the current has passed and call it lightning. The white heat expands the air so rapidly that it ‘explodes’. We hear this as thunder.

Many walkers regard lightning as ‘striking’ from the cloud to the ground and believe that the chances of a thunderbolt landing exactly where they are walking to be so remote as to not be worth considering. But if you grasp the concept of ‘lightning’ struggling to leave the ground to replenish a hungry cloud, it should then be clear that the path followed by the lightning will be from the point on the ground nearest to the cloud, because less air space will have to be overcome.

The nearest point is not always the top of a hill, as illustration I shows. Nor is it always true. that lightning will only travel between earth and cloud via raindrops (although water is a good electrical conductor). Many a wildfire is ignited by lightning before the rain from a thunder-cloud has arrived (see illustration 2).

Illustration 1: The nearest point is not always the top of a hill

Illustration 2: Many a wildfire is ignited by lightning before the rain from a thunder-cloud has arrived

If this is understood, it should be clear that if a thunderstorm approaches it is safest for walkers on a ridge to descend. They should then sit out in the open on top of their rucksacks with knees up and hands in their laps. They should not attempt to support themselves on their hands by leaning back.

Solitary trees, providing a convenient jumping off point for a ‘lightning’ discharge, should be avoided because the path could be partly via you and partly via the tree trunk. Sheltering in huts is reasonably safe, as the four walls usually provide a convenient path for electricity, so that it ignores you.

In thundery conditions, tents should be sited as low as possible but adjacent to a higher point (see illustration 3).

Lest the technically knowledgeable take me to task, it should be said that most lightning is harmless, as it travels only from cloud to cloud, equalising the difference in electrical ‘pressure’ between the two air masses. Earth to cloud lightning is the potential killer.

Admittedly, the chances of a lightning discharge travelling from earth to cloud via you are fairly remote–but not so remote that you should not take precautions.

Illustration 3: In thundery conditions, tents should be sited as low as possible but adjacent to a higher point